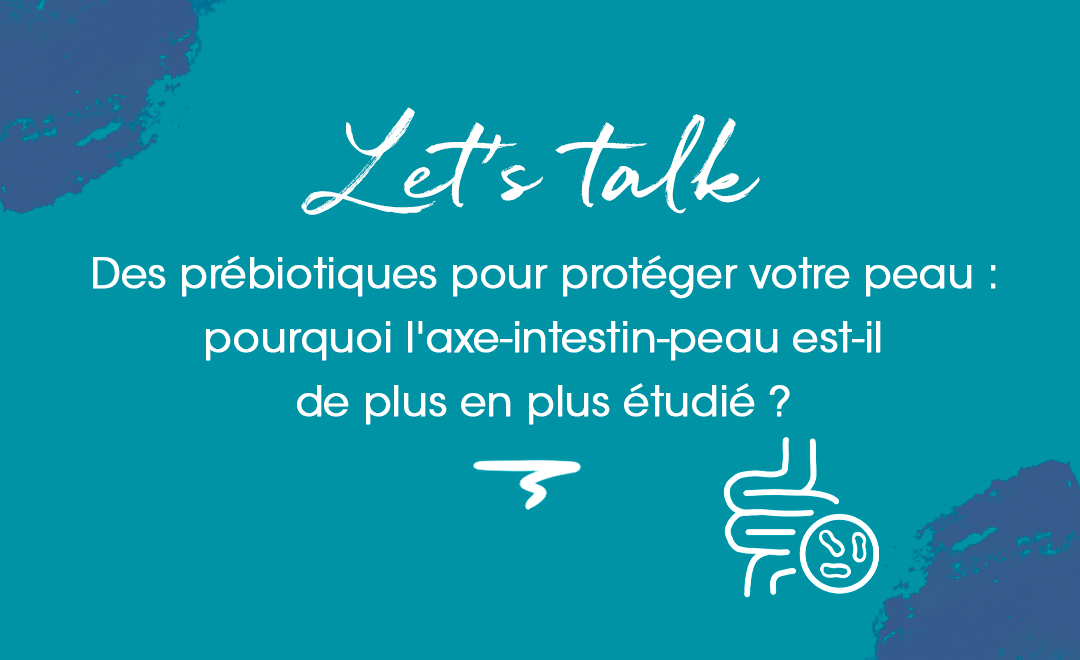 Prebiotics to protect your skin: why is the gut-skin axis being studied more and more?

Probiotics are often used as an argument to communicate the supposed benefits of brands in advertisements for certain dairy products.

Much less known to the general public, prebiotics are also a factor contributing to good intestinal health.

But what exactly are they? Why and how do prebiotics play a role in your digestive system? What are the most representative molecules? What is their relationship with the skin?

The MyPureSkin team has investigated the effects of particular prebiotics: galacto-oligosaccharides. 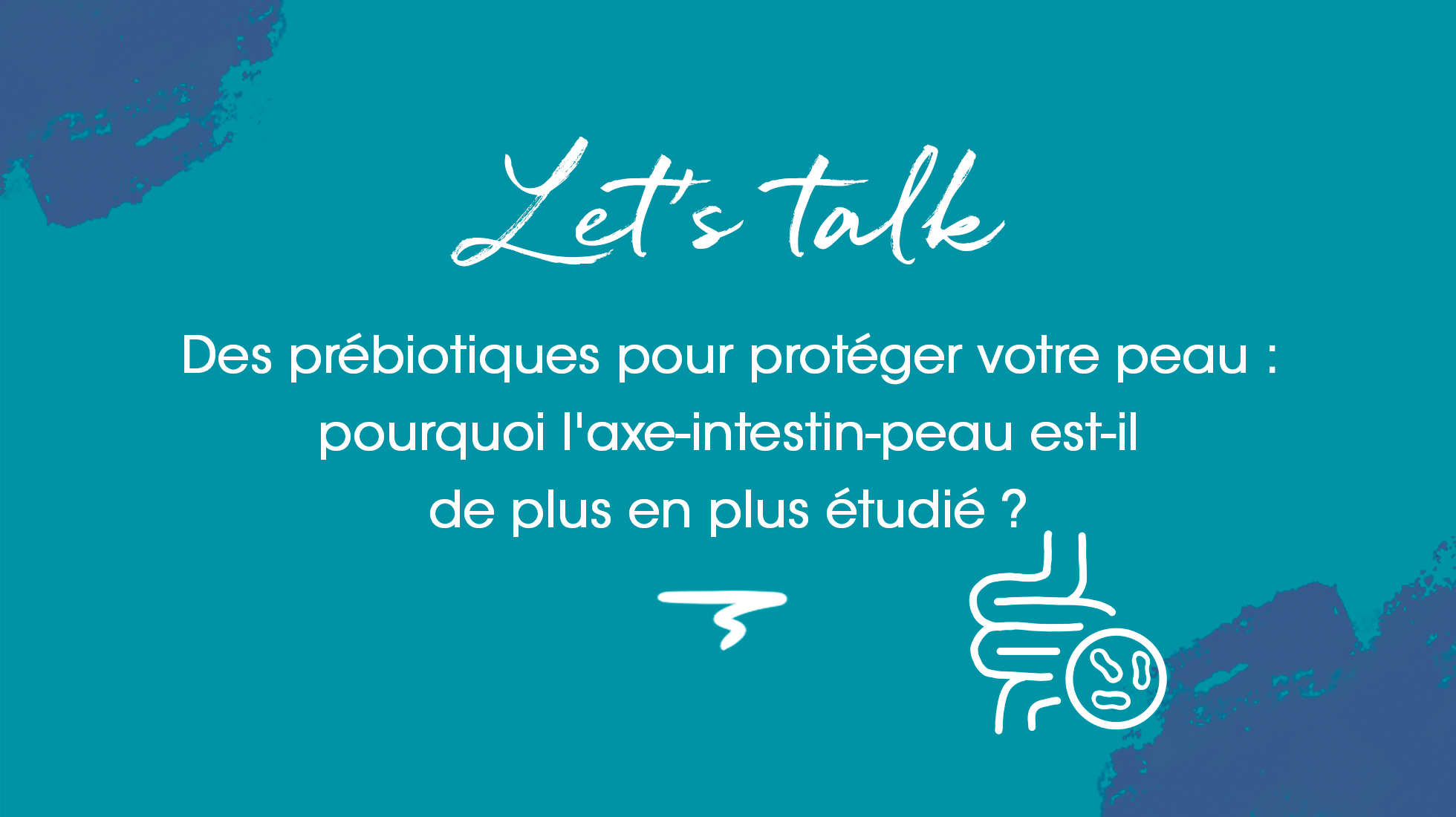 Prebiotics and probiotics: differences and relationships

Prebiotics are life-sustaining machines that have a beneficial effect on the intestinal flora.

It is precisely for this reason that prebiotics are becoming increasingly important.

Prebiotic ? Probiotic? What are the differences? What roles do these two types of agents play and how do they work?

Probiotics: a special category of micro-organisms

In a study conducted by Dr Quigley’s team and published in September 2013 (1), we find an argument often used by several yoghurt brands: the intestinal microbiota plays a major role in maintaining your health.

Considered a ‘forgotten organ’ by the authors of the research in question, the gut microbiota (also known as the ‘intestinal flora’) is a collection of bacteria of varying types and numbers.

One of the key aspects of the study’s findings can be summed up in one simple sentence: changing the state of the gut microbiota can have beneficial effects on an individual’s overall health.

This discovery (and others like it) has made nutrition a major focus for certain branches of medical research.

As a result, attention to prebiotics has been growing steadily over the past decade.

From nutrition to immunity: the consequences of prebiotic consumption are diverse

Classified as fibre, prebiotics are molecules that are not intended to follow the fate of most other foods you eat, as they cannot be processed by your stomach.

This means that they are transmitted to your colon almost intact to be consumed by the colonies of bacteria that make up your intestinal flora.

Since the bacteria need to feed themselves, they tend to draw from your food bowl to sustain themselves.

But what you need to know about probiotic bacteria is that they are particularly fond of prebiotics.

Dishes high in fat and sugar have a negative impact on your intestinal flora, but those that include a wide variety of dietary fibres help to keep it healthy.

This is why some ingredients containing prebiotics are now considered “superfoods”. This is the case for example with :

The spectrum of properties of the molecules constituting these ingredients is vast and the most well-known aspects are :

These two main functions (and other aspects of prebiotics) are outlined by the World Gastroenterology Organisation (WGO) in some of its official documents for the general public such as the “guidelines document” published in 2017 (2).

Well nourished through the provision of prebiotics, probiotics are able to maintain themselves in sufficient numbers, preventing other populations of pathogenic bacteria (such as E. coli), from multiplying and thus over-colonising the digestive system.

In other words: maintaining the balance of the intestinal flora with prebiotics has immune consequences in that the risk of developing health problems is reduced.

Probiotics and prebiotics: cell and bacterial nutrients under the microscope

But to better understand how probiotics support the quality of gut flora probiotics, we need to look at how the probiotic bacteria in your gut microbiota consume them and what they do with them.

To do this, it is necessary to take a diversion through the cells of your colon.

The colonocytes (i.e. the cells of the colon) are the front-line workers that enable your body to carry out certain stages of digestion. However, like all cells in your body, they need energy to carry out their tasks and their main source of energy is a specific type of molecule: butyrate.

Fortunately, colonocytes work in symbiosis with the probiotic bacteria of the intestinal flora. Indeed, by feeding on prebiotics, the probiotics produce butyrate allowing the colonocytes to function properly.

This harmonious life linking your cells to the probiotic bacteria therefore requires, a priori, a diet sufficiently rich in prebiotics (not just any type of dietary fibre: prebiotics specifically) to be maintained.

This intuition has been confirmed by recent research, such as that described in an article co-authored by Nielson T. Baxter and published in January 2019 in ASM Journals (American Society of Microbiology).

The conclusion reached by Baxter’s team is that the gut microbiota varies from person to person, which means that not every prebiotic is necessarily equally suitable for everyone when it comes to maintaining their gut flora.

Finally, there is one group of prebiotics that is somewhat unique and whose properties make them a popular ingredient in nutritional solutions: galacto-oligosaccharides.

Galacto-oligosaccharides: prebiotics to pave the way for targeted and effective nutrition solutions

The properties of GOS (Galacto-OligoSaccharides) have been highlighted by numerous studies (such as those of Yang & Silva in 1995, Oku in 1996 and Hartemink & Al. in 1997) and differentiate them from other prebiotics (such as TOS and FOS). Among other things, GOS are known to have

These characteristics allow galacto-oligosaccharides to limit the development of cavities when consumed, but also to bind more easily to other molecules when designing food supplements.

Improve the assimilation of nutrients to benefit all your organs

As explained above, galacto-oligosaccharides retain a very good molecular stability when bound to other molecules (such as vitamins, trace elements or collagen) and are able to pass through the first stages of digestion with very little alteration.

These two aspects make them transporters of nutrients that are sensitive to the acidity and heat of the stomach, which explains why certain food supplements such as those from MyPureSkin bind GOS to various nutrients.

This is why some supplements, such as those from MyPureSkin, bind GOS to various nutrients, which eventually become better absorbed by the body and enable it to feed the various organs more efficiently, especially the skin.

This is why several studies, such as the one by Yang Hee Hong’s team, published in 2017 (4), have come to the same conclusion: galacto-oligosaccharides have a beneficial effect on the skin.

With better nutrition, the dermis and epidermis are able to nourish themselves better and thus maintain themselves more efficiently.

Are you looking for an effective skin nutrition solution? Now you know why choosing a formula that includes galacto-oligosaccharides is a great idea.